Click here to see some of the past locations and organizations where VotePA has provided a speaker or presentation.

During the purchase and implementation of new voting systems under the Help America Vote Act (HAVA), VotePA was active in many counties throughout Pennsylvania.

• In Allegheny (Pittsburgh) and other counties we were able to move officials away from purchasing “worst of the worst” voting systems.

At the 2005 Allegheny County Democratic Endorsement vote, which was done on Direct Recording Electronic machines, Pennsylvania Voting Rights activists distributed information about electronic voting machines and the need for Voter-Verified Paper Ballots on them.Several counties such as Indiana chose paper ballot based voting in whole or in part as a result of VotePA members’ input during this period.

VotePA first sent a representative to National Association of Secretaries of State (NASS) conference, participated on the panel in the Election Assessment Project in Houston TX, at the VoteTrust USA conferences in Washington D.C., and provided a speaker at election reform conventions in Nashville TN, Portland OR, and Atlanta GA.

VotePA helped recruit over 500 new pollworkers statewide in Pennsylvania as part of the national Pollworkers for Democracy project.

During the 2008 Presidential election year three counties were forced to choose a new voting method when their WINvote DRE system was decertified by the state. Two other counties decided voluntarily to drop DREs for paper ballots.

The work of VotePA and its affiliated county and partner organizations resulted in the following improvements:

• Two of the three counties affected by the WINvote, Lackawanna and Wayne, chose voter marked paper ballots as their replacement voting system.

• Fayette County, where elderly voters were reported to be staying away from the polls due to confusion with their "dial-a-vote" DRE system, replaced all but a few of its DREs with voter marked paper ballots and optical scanners.

• In Centre County, the consistent multi-year campaign by members of VotePA and its affiliate local group Concerned Voters of Centre County culminated in complete replacement of their iVotronic DRE system with paper ballots, scanners, and accessible ballot markers.

VotePA led PA's lobbying efforts for Congressman Rush Holt's federal bills to provide voter-verified paper ballots and election audits nationwide; the PA Congressional Delegation had the most co-sponsors (including the most Republican co-sponsors) of any state.

• April 15, 2008 vote was taken on Congressman Rush Holt's Emergency Assistance for Secure Elections Act of 2008 (H.R. 5036); through VotePA's lobbying efforts all PA Democratic members vote for the bill and we had the most Republicans voting in favor of any state. Unfortunately H.R. 5036 fell short of the 3/2rds majority needed to pass as a suspension bill and died. 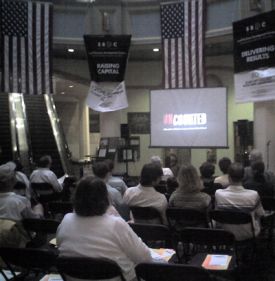 VotePA Executive Director was invited by the US Senate Rules Committee in Washington, D.C. to participate in their strategic planning sessions on election reform.

VotePA co-presented numerous showings around the state of the 2008 movie Uncounted: The New Math of American Elections. The screening in Harrisburg marked the first in a state capitol building anywhere. VotePA Executive Director appeared in the film and its trailer.

VotePA participation continued in NASS and VoteTrust conferences, and as a member of the Pennsylvania Voters Coalition and the national Election Verification Network.

VotePA participated in both Pollworkers for Democracy and the new Video the Vote national projects in the 2008 election.

VotePA’s work for verifiable, accessible, and auditable elections continued. In 2011 VotePA helped to organize a bipartisan investigation of severe irregularities in the Venango County primary, resulting in a forensic examination of Venango’s DRE machines by computer scientists from Carnegie-Mellon University:

• Dangerous DRE problems were discovered in the audit including the central tabulation computer being connected to and accessed from the internet, unsafe security procedures, and problems with DRE storage.

• Voter-marked paper ballots were used for the November, 2011 election in Venango County.

• Major vendor ES&S sent its Vice President Todd Urosevich to Venango County to serve as a scanner technician for the November 2011 election.

VotePA participation continued in NASS and Election Verification Network conferences, and as a member of the Pennsylvania Voters Coalition.

VotePA led a coalition of organizations in holding a rally for better Ballot Access for Third Parties and Independents in the PA Capitol rotunda in August, 2010. The event was broadcast statewide on PCN-TV.

In early 2012 VotePA was the only citizen organization to have an observer at all reexaminations of all DRE voting systems done by the PA Dept. of State.

In 2012 VotePA proposed a new state law requiring any future replacement of DREs with paper ballot based voting and moves it close to introduction.

With all Pennsylvania's DREs now 10 years old or older, VotePA is working to get voters and officials to plan for new voting systems in this Commonwealth. We must replace all our ancient, unverifiable DRE voting machines. And the next round of voting systems purchased in Pennsylvania must include voter-verified paper ballots, and meaningful audits of our elections.

It is up to us all to continue this work, and keep fighting for fair and accurate elections for everyone.

Click here to see some of the past locations and organizations where VotePA has provided a speaker or presentation.